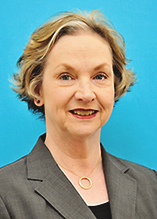 Cathy Franks, a native of Oklahoma, holds a Bachelor of Science degree from Oklahoma State University and a Master of Arts degree in Education and Human Development from George Washington University.

Cathy Franks is a former history teacher who taught at Killeen High School in Texas, where she was twice named “Teacher of the Year.” She is the director of international cultural education for Musco Lighting International, a company that provides lighting at major sporting events and stadiums worldwide.

Mrs. Franks previously served as an executive board member for the Military Child Education Coalition, a nonprofit that works to ensure quality educational opportunities for military children affected by mobility, family separation and transition. Her numerous awards for public service include the Commander’s Award, Department of the Army Outstanding Civilian Service Award, Secretary of the Army Public Service Award and the Secretary of Defense Award for Outstanding Public Service.