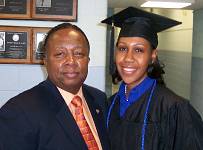 Over the course of a twenty-nine year career with the Department of the Army (DA), Mr. Cortez K. Dial has held challenging positions in Human Resources, Professional Development and Education with increasing levels of executive responsibility.

His career has predominantly been characterized by key assignments in personnel management, personnel services, and the formulation of programs, policy, professional development and teaching. In his last military position as The Director of Family Programs, he was responsible for the formal education, development, and preparation of 17 (colonel and civilian equivalent) students for the broad responsibilities of future senior leadership in the Department of Defense, Joint, or combined organizations within the federal government. As a seminar leader (faculty member) at the United States Army War College, he prepared and presented a graduate-level core curriculum focusing on command, leadership, management, ethics, equal opportunity (EO), equal employment opportunity (EEO), diversity, and decision making at strategic levels. He also served as a US Army War College point of contact for appropriate government agencies, private organizations, and educational institutions in the areas of human resources, family education, family support and service programs, along with personnel management, diversity management and human relations. For these areas of concentration, he was the Army War College liaison with the Joint Staff, Department of Army (DA), Training and Doctrine Command (TRADOC), Personnel Command (PERSCOM), Defense Equal Opportunity Management Institute (DEOMI), and the Soldier Support Institute (SSI). Lastly, he was the officer in charge of the annual three-day trip to Washington D.C. for over 350 senior military officers, International Fellows, and DA Civilians with the mission and organizational goal of gaining first hand knowledge of executive and strategic leadership in government as they visited over seventy-five Members of Congress and more than fifty different departments, embassies, and agencies.

He continued his professional development with formal training, membership in societies and participating in DOD sponsored forums addressing Human Resources and Professional Development. He is a graduate of the 2002, Pennsylvania Education Leadership and Policy Centers Fellowship Program while continuing to be a guest lecturer on Human Resource Policy and Organizational Culture. In April 5, 2003, he gave an extensive presentation to Senators, Bill Frist, George Allen, Rick Santorum and Jim Kyl on changing organizational culture. He regularly lectures and facilitates workshops on diversity and organizational culture at The Defense Equal Opportunity Management Institute and he was one of the editors of the chapter on “Civilian Personnel” found in the U.S. Army War College publication, How The Army Runs. Additionally, he published two articles describing organizational culture: “Mentoring: A Road Paved with Good Intentions”, and “One Team, One Fight.” He is a recipient of the Army’s Legion Of Merit Award for distinguished service in the human resource field as Deputy Chief of Staff Personnel, Eight United States Army. On August 10th, 2003, he became the Director of Residence Life at Virginia State University, was promoted to Assistant Vice President for Student Affairs in 2004. For the next nine years he served as the Presidents Chief of Staff before becoming an Associate Professor in the Mass Communication Department in the fall of 2014.