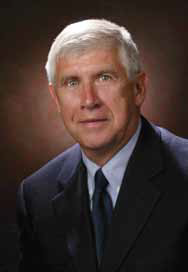 He is a native of Emporia, Virginia and retired on 31 December, 2008, after serving a 38-year career in the United States Military as an Army Officer; the last fourteen as a General Officer.

General Griffin has a Bachelor of Science degree from Old Dominion University, an MBA from Mercer University, and an Honorary Doctorate from Old Dominion University. He is a graduate of the Infantry Officer Candidate School, Infantry Officer Advanced Course, Command and General Staff College, and the Industrial College of the Armed Forces. General Griffin also earned the rank of Eagle Scout. He and his wife Noel have lived in central Texas since 2000. They have a small cattle ranch, and he has operated the B Griffin Company, LLC since 2009.