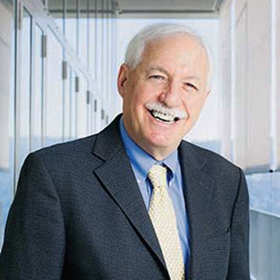 Richard M. Lerner is the Bergstrom Chair in Applied Developmental Science and the Director of the Institute for Applied Research in Youth Development at Tufts University.

He went from kindergarten through Ph.D. within the New York City public schools, completing his doctorate at the City University of New York in 1971 in developmental psychology.  Lerner has more than 700 scholarly publications, including more than 80 authored or edited books. He was the founding editor of the Journal of Research on Adolescence and of Applied Developmental Science. He was a 1980-81 fellow at the Center for Advanced Study in the Behavioral Sciences and is a fellow of the American Association for the Advancement of Science, the American Psychological Association (APA), and the Association for Psychological Science (APS).  He is the 2013 recipient of the APA Division 7 Urie Bronfenbrenner Award for Lifetime Contribution to Developmental Psychology in the Service of Science and Society. He is also the 2014 recipient of the APA Gold Medal for Life Achievement in the Application of Psychology and the 2015 recipient of the APA Division 1 Ernest R. Hilgard Lifetime Achievement Award for distinguished career contributions to general psychology. He is also the 2016 recipient of the International Society for the Study of Behavioral Development (ISSBD) Award for the Applications of Behavioral Development Theory and Research, and of the 2017 Society for Research in Child Development (SRCD) Distinguished Contributions to Public Policy and Practice in Child Development Award. The APS named him as the 2020 James McKeen Cattell Fellow Award for lifetime outstanding contributions to applied psychological research.

Prior to joining Tufts University, he was on the faculty at The Pennsylvania State University, Michigan State University, and Boston College, where he was the Anita L. Brennan Professor of Education and the Director of the Center for Child, Family, and Community Partnerships.  During the 1994-95 academic year, Lerner held the visiting, Tyner Eminent Scholar Chair in the Human Sciences at Florida State University. Lerner serves on the Board of Directors of the Military Child Education Coalition (and co-chairs their Scientific Advisory Board). In July 2017, Pope Francis appointed Lerner to a five-year term as a Corresponding Member of the Pontifical Academy for Life.

Lerner is known for his theoretical work on the mutually influential relations between individuals and their settings, as the fundamental basis of life-span human development, and for his use of this approach to developmental theory to describe, explain, and optimize the relations between adolescents and their peers, families, schools, and communities. His work integrates the study of family, school, and community-based programs in the promotion of positive youth development and youth contributions to civil society.

He is married to Dr. Jacqueline V. Lerner, Professor in the Department of Applied Developmental and Educational Psychology in the Lynch School of Education at Boston College.  They live in Wayland, Massachusetts.  Their children are Justin, a director and screenwriter, and his fiancé Sarah, who is a novelist and librettist; Blair, an advertising executive, and her husband, Jamie, a contractor, and Jarrett, a novelist and editor, and his wife, Danni, an entrepreneur and business owner. Rich and Jackie have four grandchildren.