Think back to your days in junior high school. What was your biggest worry? Did it have to do with making sure you had the coolest clothes? Was it hoping that the person you liked also liked you, too? Or was it constantly trying to figure out where you put your homework?

For 14-year-old Kaitlin, the daughter of a U.S. Navy submariner, her biggest worry was how she could make it through the day. Although she didn’t know it at the time, this military-connected kid was suffering from depression.

A 2018 article from The Journal of Pediatrics, cited by the Center for Disease Control, found that approximately 1.9 million children from the ages of 3-17 years are currently diagnosed with depression. And that’s just the children identified.

Once she received her diagnosis and began treatment, Kaitlin realized there was an opportunity for her to help others.

“After my breakthrough, I realized there were other kids who were probably going through the same things as me,” said Kaitlin. “I wanted to create a safe space for them to go when things got difficult for them at school.”

To make her dream a reality, she turned to a group that had been a constant in her life for many years – the Girl Scouts of America.

She elicited the help of Grace, a fellow Cadette in her troop with who Kaitlin said she had the strongest bond. Grace is also a military-connected kid, but her father left the service when she was very young.

Together, the young ladies chose to tackle an optional challenge afforded to all Cadettes and compete for the Silver Award.

The Girls Scouts state on their official website that the Girl Scout Silver Award is “the highest honor a Cadette can achieve.”

“We chose to make a mental health room at our school,” added Grace. “Hopefully any student who has something going on where they don’t talk to their friend about things deep inside can go to the room and be able to calm down, take a mental health break, and a breather.”

Kaitlin’s and Grace’s mothers said trying for the Silver award takes a huge commitment that must include required hours, something that benefits the community and not the Girl Scouts, involves the community, and sustainable.

The girls received support from their Chinook Trail Middle School Principal Tom Andrew and counselors. They also completed 100 direct mail letters to professional counselors and therapists to learn more about professional recommendations of items that could be considered for the room.

Even though Grace mentioned that “COVID basically ruined our fundraisers,” the girls were not to be denied. They took the initiative to create an Amazon Wish List and were successful in raising $2,000-worth of items for the room.

“We asked for two or three of everything,” added Kaitlin. “This helps us meet the requirement of the room being sustainable because items can be easily replenished.”

When asked if the room had a name, the girls replied, “Roots and Wings,” which is taken from a Chinese proverb – and interestingly echoed in Principal Andrew’s greeting on the Academy District 20 website.

The room is scheduled to be open before April of this year, and will be overseen by the school counselors. Teachers and counselors will work together for identified students to use the room, by escort, for 10 minutes at a time.

The girl’s moms both said that Academy District 20, which is located in Colorado Springs, Colo. Is “really serious about the mental health of students.” The hope, as do Kaitlin and Grace, that the success of the Roots and Wings room will result in all schools across the district will look at making this room an option at all schools throughout the district in the future.

Kaitlin, Grace, and their moms ask that anyone who has questions or would like to learn more about their Roots and Wings room please email them at Gstroop409silveraward@gmail.com.

Learn more about the Girls Scouts of America – the group that helped Kaitlin and Grace become future history makers, and how you can get your daughter involved at GirlScouts.org. You can also find out the latest news regarding depression and other conditions that military-connected children are facing at AACAP.org. 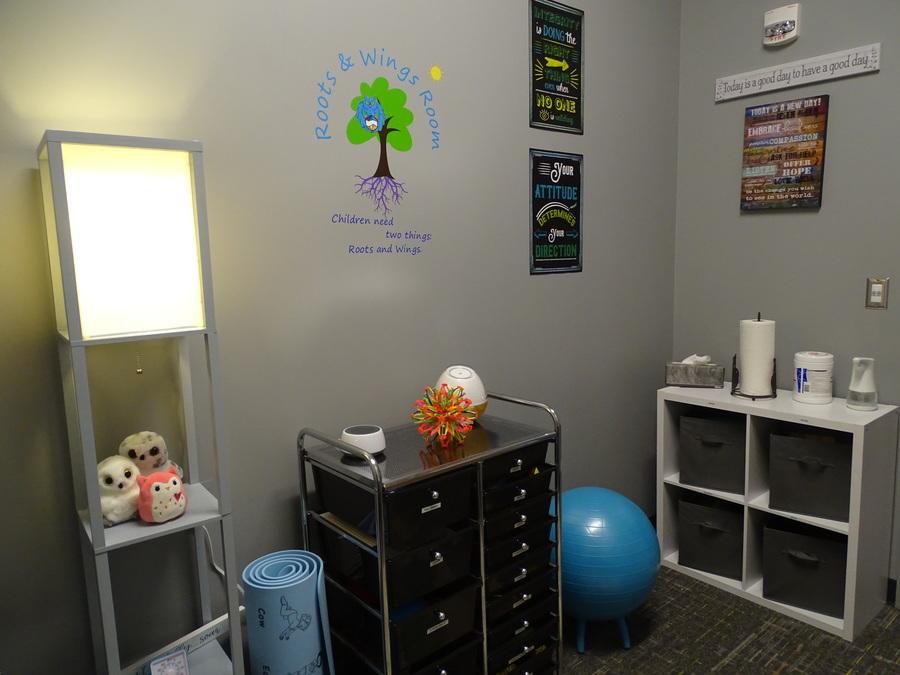