The experiences and lessons learned by the couple in their formative years have proven vital as they work to raise five kids – Joshua, 13; Zakary, 11; Benji, 9; Keri, 7; Derek Jr, 5. – and navigate two careers.

Amid all long hours and many moves, they say their success and happiness always coincides with the strength of their community.

“When you get into a community where you feel you can be involved, and there’s support, it makes a world of difference,” said Derek who crossed over from the Air Force and now works for Space Operations Command at Peterson Air Force Base as an acquisition officer focused on producing new space capabilities. His wife, Joy, is a freelance editor who works from home.

When work is over, Derek said there’s nothing he and Joy love more than spending time with their children.

“We love our kids, and we want them to excel,” added Derek. “I’ve been a huge proponent of them finding what they love and cultivating that.”

The Woudens are also a strong values-based family who by the “Golden Rule” and have found that it has made their lives better and set the right example for their children.

Joshua was recently recognized as inaugural Military Child of the Year for the Space Force.

Derek acknowledged that his oldest has a lot of resiliency, which is one of the attributes judges look at in selecting a Military Child of the Year winner, but it’s the intangibles that the teenager brings to the family that make Derek the proudest.

“His brothers and sister look up to him and how he deals with situations,” said Derek. Joshua is an athlete, who excels in baseball – something his younger brother Benji wants to emulate. But the oldest Wouden child also does a lot of community service which makes his parents proud that he is doing things to help others – a quality not lost on his siblings.

Derek described his youngest, Derek, who they call “Junior,” as a fun kid who loves video games.

“I’m always encouraging the kids to get out of the house and experience new things, but Junior wakes up and says, ‘I’m playing Mindcraft,’” continued Derek. “He knows he’s the youngest, and let’s say he understands how to leverage that to his advantage.”

But, like so many other families, the Woudens have faced adversity.

“Keri’s has had to deal with some anxiety, and we’re working through that,” added Derek who added that his only daughter carries the title of princess. “She loves to dance, and we’ve seen her really grow over the years. She’s worked through her shyness to be more confident.”

The Wouden’s second oldest child Zakary, was diagnosed with Coats disease, a rare disorder that affects the blood vessels in the retina, which has rendered him blind in one eye.

“He’s undergone 10-12 surgeries, and that’s taken him out of sports and made him more cautious in how he interacts,” added Derek. “He has an affinity toward engineering, and we’ve cultivating that as our family works together to gain a better understanding of working with him to achieve his potential.”

He acknowledged that ask the kids get older and become intertwined in activities and make strong connections with friends, it has been harder to move.

The Woudens have lived in several places including Cheyenne, Wy., Washington DC, Montgomery, Ala. and a previous tour in Colorado Springs, Colo. The importance of community had never been more important that during this past move.

“We have a network here, and we’ve been fortunate to make friendships with some really amazing people,” added Derek.

When the family was previously assigned to Schreiver Air Force Base, which is about 10 miles from their current assignment, one of those friendships they created and maintained was with Terry Brown and his family.

When the Woudens experienced difficulties with finding a home due to the market, they made a tough decision to move Joy and the kids in with his parents in Kansas City for six months.

“Terry offered me a chance to chance to stay in his home so I could minimize the amount of rent and continue to support the family from Colorado,” said Derek.

Now in a new home and settled back into a community they love, Derek feels that the Colorado Springs area is the perfect place for his family. The Woudens are energized about District 20 where their kids attend school and the possibilities available to their entire family.

Derek said it’s important to be part of as much as possible as a military family because the benefits provide multiple rewards.

“As you do that, it will make the community better, improve your quality of life, and help us all be more successful in our mission set." 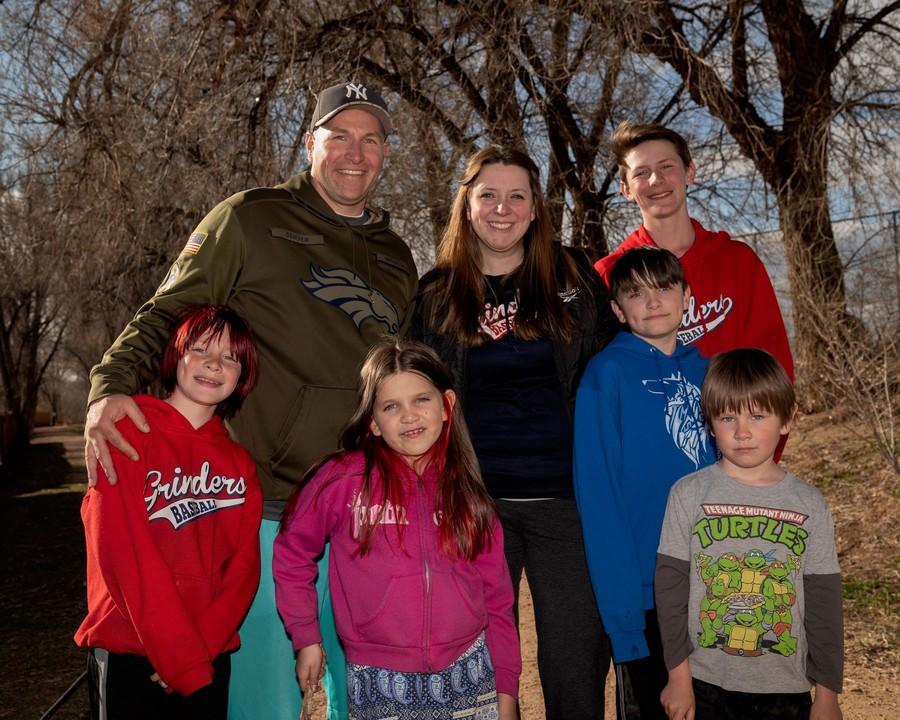